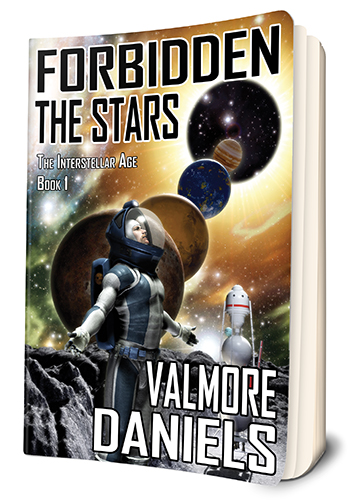 FORBIDDEN THE STARS
The Interstellar Age Book 1
Now Available At:

Audiobook Narration: Dave Wright
At the end of the 21st century, a catastrophic accident in the asteroid belt has left two surveyors dead. There is no trace of their young son, Alex Manez, or of the asteroid itself.

On the outer edge of the solar system, the first manned mission to Pluto, led by the youngest female astronaut in NASA history, has led to an historic discovery: there is a marker left there by an alien race for humankind to find. We are not alone!

While studying the alien marker, it begins to react and, four hours later, the missing asteroid appears in a Plutonian orbit, along with young Alex Manez, who has developed some alarming side-effects from his exposure to the kinetic element they call Kinemet.

From the depths of a criminal empire based on Luna, an expatriate seizes the opportunity to wrest control of outer space, and takes swift action.

The secret to faster-than-light speed is up for grabs, and the race for interstellar space begins!