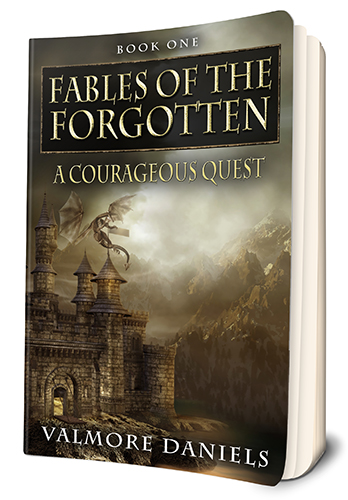 A COURAGEOUS QUEST
Fables Of The Forgotten, Book One
Now Available At:

Ages ago, the world was sundered into Five Lands when the Prism of Power was shattered. The people of each Land lost an attribute: sight, speech, balance, courage, and order.

When the Mage uncovered a shard of the Prism, he used its magic to create his own land, a dark and twisted place straight out of a nightmare. But that wasn’t enough for him; he lusts for the power to rule the other Lands. His first move is to kidnap and hold the queen of the Land of the Folk hostage until her people surrender.

The Folk are cursed, and do not have the courage to stand against the Mage. The Seven Sages send out a call for help. Only someone from the Mage’s home Land can hope to combat him.

Twelve-year-old Leif is the only one who answers the call, but he doesn’t know what he’s signed up for: the Mage holds a secret that could spell his death…